What a beautifull day 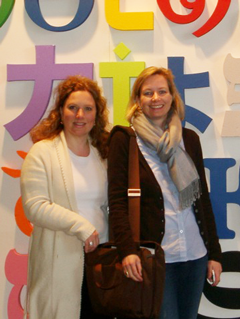 The story of how our idea Tata & Squack-The big Journey turns into a book has many beginnings. Its journey starts in 2007 as Tanja asks me to develop together with her a wildness story about a girl and her animal friend in Africa. From idea to book our journey is fraught with challenges. The idea was there but the characters, shape, style, tone, design, were yet to be created. During the next four years we worked hard and helping hands of talented people touched the project on its journey from idea to a finished book. The first dummy was ready in 2008. In March 2009 we visited the Children’s Book Fair in Bologna. The publishers loved the concept, we took their visions, from which we learned a lot, into account and returned to the drawing- and writing-board. It would take until 2011 to get the book published. Tata & Squack entered our life when we were both on a fairly rocky road. The journey of Tanja & Elisabeth has gone further than any of us expected, where it will end only time and our readers will tell. Although there is still a loth of work to do to turn the book into a success; the joy has been with all its ups&downs, the process. Most important to me is that I finally got to work in a creative way with a special woman. Today on the first of November 2011, our first book is being launched, what a beautiful day.