The making of a new Tata&Squack-Adventure 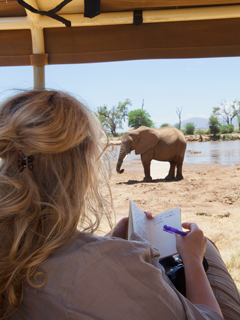 The next adventure of Tata&Squack will evolve around one of the most special animals on our planet, Africa’s largest land mammal, the elephant. A wild animal that has been in Africa for a very long time, much longer than man has. Known for their social behavior and intelligence, the elephants live a family life. We worked on the new story in the Samburu National Reserve, where we observed and took pictures of different elephant families in their environment. This part of Kenya is known for its big elephant population as is Amboseli. We were welcomed by David Daballen at the Save the Elephants Research Centre founded by Iain Douglas-Hamilton. One of the world’s foremost authorities on the African elephant, who pioneered in-depth scientific study of social elephant behavior. We were impressed by their conservation approach and their deep understanding of elephants. Elephants are intelligent creatures with complex levels of consciousness. We as authors would like to try to bring the elephant closer to children in the next Tata&Squack adventure. Maybe finding some new ambassadors to secure the future lives of elephants.