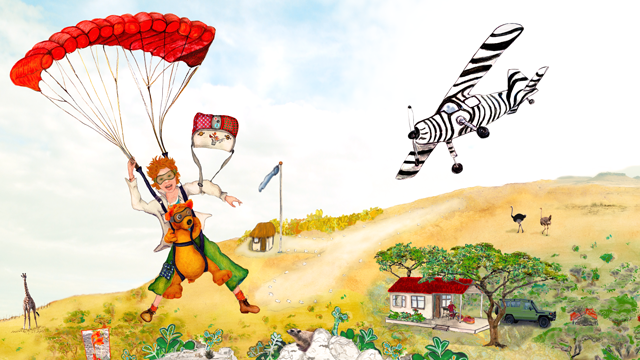 A new year is laying ahead with life to challenge us and to make a difference. One of our challenges is to bring The Big Journey of Tata&Squack, the Great Migration of the Wildebeest under the attention of children. As did an adventurous Zoo director sixty years ago. He took his son, Michael Grzimek, on animal collecting trips to Africa. Young Michael produced a film about one of his father’s books “No Room for Wild Animals”. The film was a critical and commercial success. Instead of enjoying the lifestyle of a young and successful film producer, Michael offered a large percentage of the profit to the Tanzania National Parks to buy land to add to the Serengeti. He was asked to survey the Serengeti and map the movements of the great herds. In late 1957, Michael and his father bought a Dornier 6-seater bush plane painted it in zebra stripes and set of to fly to the Serengeti. One day tragically, Michael’s plane hit a vulture while flying near the Sanjan Gorge in the Gol Mountains east of the Serengeti Plains. He was killed instantly and buried on the rim of Ngorongoro Crater. In just a few years this immensely likeable and tireless young man made friends of all races and moved wildlife conservation and management in to a new airborne age. The Flying Zebra created in Tata&Squack is a homage to this selfless and energetic man who gave all he possessed for the wildlife of Africa, including his life. He made a difference.