Tata&Squack in the Red Chair 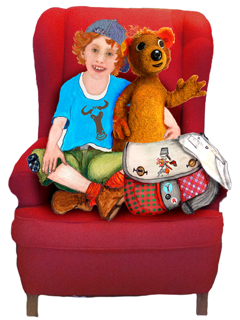 Squack is more than a little chubby creature on a key chain. We gave him his name to honor Squack Evans, a great safari guide. The orange puppet in the book was designed as a mix of different animals, with spots in his fur from a hyena, he has the scruffy manes of a young lion, a bear belly, monkey hands and sticky-out ears. I felted him around a frame with real joints, which means he can be modeled into different poses. For the illustrations he was photographed. In the book Tata&Squack the Big Journey, he becomes Tata’s friend. Her parents are researchers, who studied the migration of the Wildebeest in the Serengeti. Tata picked Squack from a basket full of toys on her flight back home. Squack turns out to be magical and together with her new friend she goes back to Africa. They join Moyo, the wildebeest called “heart”, on an adventurous hunt for the “watertreasure”. They learn why two million animals follow the rain, year after year and how to survive lions and crocodiles along the way. In their next adventure Tata&Squack will meet a royal elephant and learn more about these special animals. The new book will be published in 2014.