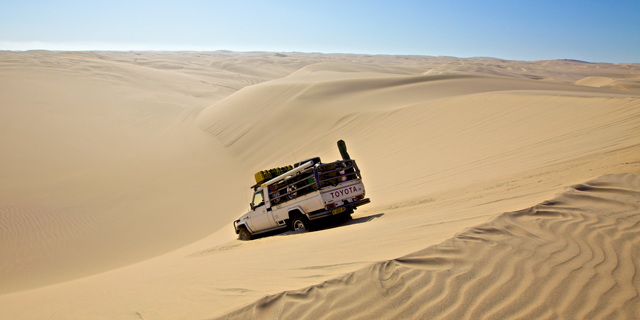 Driving through the Namib desert was a great experience, an art which we as “town clowns” do not master. It does not always bring out the best in people, but when you do succeed to cross this sea of sand as a team, after getting stuck many times, it feels like quite an accomplishment. To begin with you have to be patient and take your time to decide which route to take or you might end up in a sink hole. In the glaring light it is difficult to judge depth of field. To drive up a dune in sugary soft sand can take more than a few attempts. But if you stay in the same track and prevent the wheels from spinning,  every run compacts the sand further and finally you reach the top. Then comes the drive down over nearly vertical slopes. The first time I refused to stay in the car. I walked down and watched from below. My heart nearly stopped when I saw the car going over the edge. But the sand seemed to carry it down. It made a muffled sound, like driving through fresh snow, though the temperatures were far from that. The days could be hot with more then 40 degrees Celsius and the nights cold from the winds and the fog being carried in from the ocean. The stunning landscape with its beautiful colors and shapes is full of life with creatures who have adapted to this harsh climate. Little beatles, toktoks, lizards, snakes, scorpions, they all leave their tracks to tell their story. We even spotted a few oryx and a brown hyena walked past our camp on an early morning patrol, hoping to find a few scrapes of our food, just like the crows who kept on following us.