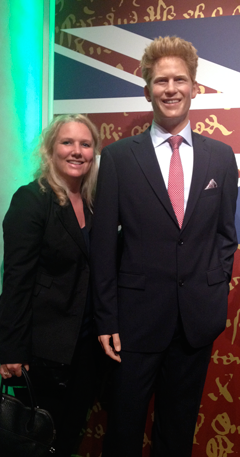 While researching our new book “Mission Elephant” we met the Royals, an Elephant Family, in Samburu National Park in Kenya. We decided that the name of our main character would be Harry. Therefor it was fun to meet a lifelike wax figure of the real Prince Harry when I visited London with my daughter during the summer holidays. Prince Harry of Wales is an extremely sincere, witty, big hearted, nature-loving person. With his jokes, often at his own expense, he lightens up the mood of many people. Great traits for our main character. In the book Tata&Squack and their elephant friend Harry bring across the message of anti-poaching of the worlds biggest Mammal in a child friendly way, while the real Royals appeal to a more serious audience. Prince Harry, his brother Prince William and his father Prince Charles, are joining forces with 50 world leaders to fight against poachers who slaughter African elephants for their tusks. “There’s not a moment to lose if we are to save the species,” Prince Charles said attending the world’s largest conference on the illegal trade in wildlife. A conference held to strengthen law enforcement response to poaching and lessen demand for illegally obtained ivory, which has been growing especially within Asia. Currently, poachers kill up to 60 African elephants a day for their tusks, and herds have diminished by about two-thirds in the past decade.”We need to tackle wildlife crime with a concerted global response as vigorous and forceful as the trade itself.” It is great to see that Royals but also Leonardo di Caprio, Li Bing Bing and a lot more influential people are joining forces to save the elephant.