How to foster an elephant 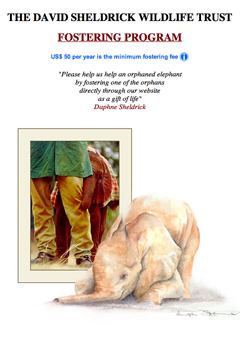 We all know Foster Parents Plan, which lets you sponsor a child and help the community it lives in. But have you ever thought about fostering an elephant? The David Sheldrick Wildlife Trust lets you do this. It was established in 1977 in honor to the memory of the famous naturalist and dedicates itself to the protection and preservation of Africa’s Wilderness, particularly endangered species such as elephants and Black Rhino. The driving force behind the trust is Daphne Sheldrick. When her husband was still a warden at Tsavo she started taking in orphaned animals. She took care of them until they were able to lead an independent life again. Bringing up elephants proved to be a challenge. It took her years to develop the right formula for the milk dependent infants. After her husband’s death Daphne moved to Nairobi National park, where she set up the famous orphanage, which we hope to visit later this year. You can foster an elephant for a minimum of 50 Dollars a year. You will receive an official certificate, get monthly updated from the keepers of your elephant and a beautiful painting of Angela Sheldrick. We think this is a great way to help the elephants in the current crisis, as a lot of the orphans brought in from all over Kenya are victims of poaching. The image is a screenshot from the Fostering Program of the David Sheldrick Wildlife Trust.