Exotic beasts back on royal grounds 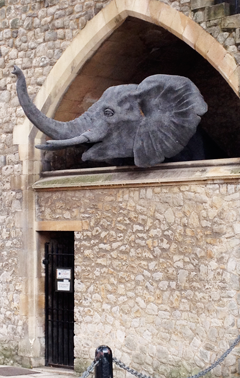 Visiting the Crown Jewels in London an elephant on the grounds surprised us. As it turned out in 2011 an exhibition of the wire sculptures of Kendra Haste brought the “Royal Beasts” back into the Lion Tower. We loved the sight of the wire animals which give the London Royal palace an exotic feel in an, at first thought, unusual place. We learned that historically it was quite common for rulers to keep exotic animals in captivity. Back then the Royal Collection, kept in the medieval Royal Menagerie, was quite extensive because of diplomatic gifts including three leopards from Frederick III. In 1254 an elephant house was constructed. By the 18th century, the menagerie, a small zoological garden by then, was opened to the public; admission cost three half-pence or the supply of a cat or dog to be fed to the lions. In 1828 there were over 280 animals representing at least 60 species. The last of the animals left in 1835. They were relocated to Regent’s Park after one of the lions was accused of biting a soldier. So now beasts of wire bring back the exotic feel to the royal grounds.